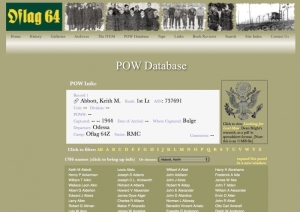 The online home of the former POWs of Oflag 64. The prisoner of war camp designated Oflag (Offizierslager) 64 was established by the Germans during World War II in Szubin, Poland (written Schubin by the Germans) to detain captured American officers. The first American officers arrived in the camp on June 6, 1943. The initial occupants numbered around 150. By the time the camp was evacuated in January 1945, their ranks had grown to approximately 1,400.

We coded a script to help display the information on almost 1800 names.